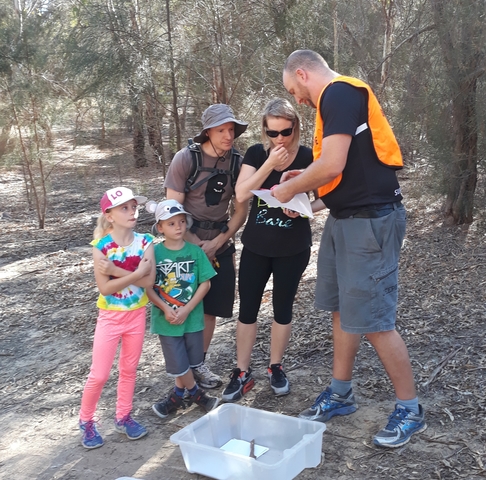 Down by the river on a Sunday morning, Garvey Park provided a lovely setting for the NavDash. Paul Dowling set the event, did the set-up, ran the start and kept everything running smoothly for a big crowd, with the help of BO club volunteers. Thanks Paul.

Helping Paul were Andrea Eves and Bryce Crage as instructors, Control collectors Cameron Duncan and Adam Binks while the Administration in the caravan was handled by Cameron Duncan and Jane Punyanitya. In fact, everyone was so efficient that the event was packed up just 50 minutes after course close!

Also at the event was Jenny Casanova, Orienteering Australia’s Technical Director, who had just spent a successful week in WA.

Jenny started her stay in WA by leading a Level 3 Controllers workshop before heading off for a week exploring WA from the Porongurups to Esperance and Wave Rock. In her role as IOF Advisor for the Australian Championship Sprint and Middle Distance WRE events in Narrogin (the weekend after the Australian 3 Day events on the Easter Weekend) she meet with mappers and setters Noel Schoknecht and Tony Simpkins to inspect the areas.

Jenny was impressed commenting that the terrain is “complex, fast and just what is required for some exciting competitions”.
We look forward to the Easter 2019 Carnival with many people following in Jenny’s footsteps and enjoying both some top quality orienteering as well as the beauty of WA’s South and Southwest coast.